Working with Newcastle University we want to find out how much trench art exists in the North East, especially items that have a family story to tell.

What is Trench Art?

Trench art is the recycled stuff of war. Coming in all shapes and sizes, it is often made from discarded rifle or artillery shell cases, but it can also be made from leather, bone, wood or even army biscuits! The general rule is that it should incorporate at least some material that was originally used for the waging of war.

Servicemen made trench art for a number of reasons. For some it was a way of simply passing the time when not in action. For others it became a consuming hobby and also a way of making a bit of spare cash. Trench art was also made in hospitals, and metalwork turned into domestic ware was often used to raise funds for the wounded. Some trench art, such as rings, brooches or crucifixes, may have been highly personalised, treasured and even talismanic. Larger pieces which eventually made their way into homes across the regionacted as both household items in the kitchen, fireplace or on the mantelpiece,as well as souvenirs of the war.

We are looking at two aspects of trench art:

Before the First World War Armistice Centenary in 2018 we’ll be creating a trench art museum displaying locally based artefacts that can be toured around the region for the benefit of schools and community groups. At the heart of the collection will be a number of researched pieces for which we can provide a story of how and where the artefact was acquired as well as its life over the past 100 years. Some of the displays will be virtual while others will appear in some of our 20th-century houses, just as they did in homes across the North East. An important element of the museum will be oral history recordings, where current owners talk about their trench art in artefact-centred interviews. We hope this will tell us much about the social history of the war and these art forms. It will also enable us to access generations of memories before they’re lost.

Be Part of It

If you own trench art that is associated with the current or historic counties of Durham and Northumberland and would like to have it recorded as part of this unique project, we would be delighted to hear from you. If you have a piece that has a family story, even better. For certain key pieces we’d research the min depth and, where possible, examine relevant service and other archival records. We’d also like to interview the present owners, especially any who may still remember those who served in the First World War. But we’re also interested in how the stories of these artefacts have been passed down through later generations.

Please email us at trenchart@ncl.ac.uk if you’d like to tell us about your piece and learn more about being involved. 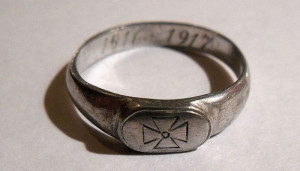 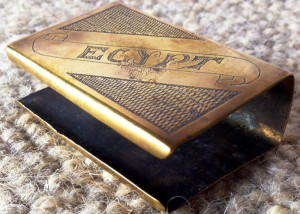 A matchbox holder from the Middle East and engraved R Sadler. (J. Wade) 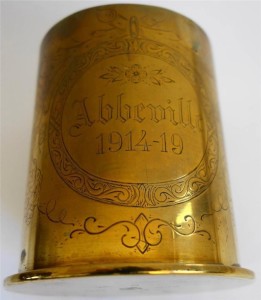