At our 1940s Farm, you’ll discover the stories of wartime life in North East England.

The farmhouse and cottages of our 1940s Farm represent everyday domestic life, featuring objects from the era, ranging from a wireless (radio) to ration books. You may hear 1940s music or news broadcasts and smell cooking, using wartime rations.

Pop into the cosy farmhouse, and find out about wartime family life. You may smell cooking on the Aga or range (using rations, of course), hear 1940s music and news broadcasts on the wireless, and see “make do and mend” in action.

These old labourers’ cottages have some new tenants – a family of evacuees in Orchard Cottage and Land Girls next door in Garden Cottage.

Orchard Cottage represents the home of a family of evacuees, who have moved from a town or city to the safety of the countryside and are adjusting to rural life. Orchard Cottage also hosts activities for older people and people living with dementia, and their families and carers.

Farms played an important role during the war, with their vital land work helping to save the nation from starvation. In 1939, 70 per cent of Britain’s food was imported from abroad and there were fears that German submarines could create a blockade, cutting off supplies. This meant there had to be a major campaign to produce home-grown food. Look out for tractors, tools, animals, the farmer’s out-of-use car, and the pill box – ready in case of attack.

Stop off for refreshments at the British Kitchen, based on the British Restaurants set up by the Government during the war. Spam sandwiches anyone? 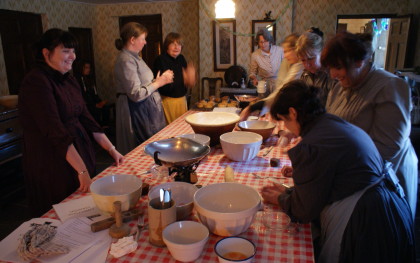 Nothing beats the mouthwatering smell and taste of freshly baked goods from a coal-fired range! Come and experience the delights of making your own delicious traditional home baking in the period setting of our Home Farm kitchen. 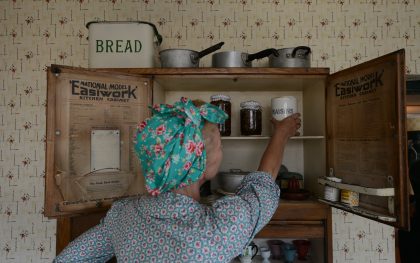 Spend the evening in our 1940s Home Farm kitchen cooking a variety of wartime recipes on our coal fired range and finding out how important the kitchen was to the war effort.