Seventy-nine-year-old David Thomas Young has painstakingly recreated a 19th century steam locomotive with the help of one surviving photo.

David has spent more than 5,000 hours, over three years, building Samson at Beamish Museum, based on the original 1874 narrow gauge engine. He is following in the footsteps of his great, great grandfather, Thomas Young, who worked at Hetton Colliery Engine Works.

On Thursday, 29th September David officially launched the locomotive, alongside Paul Jarman, Beamish’s Assistant Director Transport & Industry, with whom he worked on the project. Paul has written The Book of Samson, which tells the fascinating story of recreating the steam locomotive, which worked on the tramway to Cornish Hush mine in Weardale.

Volunteer David, a retired safety engineer, and Paul used the only surviving photo of Samson, two engravings and a contemporary trade magazine description to skilfully create from scratch a close reproduction of the original. David, 79, of Fatfield, Washington, said: “I was never a hands-on mechanic, I was more an engineer sat behind a desk. This is basically a hobby gone mad!

David’s great, great grandfather, Thomas, was involved in the building of steam locomotive Hetton Lyon No.2 – the Hetton engine at Beamish incorporates the remains from that engine.

David is delighted with Paul’s book, saying: “I was quite overwhelmed to see my mug on every other page!

“Paul has been his usual modest self as he deserves full recognition for his considerable input in managing the project.”

Paul said: “It is a strange feeling to finally see Samson in steam after spending so long thinking about its creation and wondering how the original designers approached the various aspects visible in the 1870s photograph. David has done a fantastic job turning this limited evidence into the steam locomotive we see here now.”

Paul added: “Like the construction of the engine, production of the book has been something which I have been very passionate about, both to bring David’s story to a wider audience and also shine the spotlight on parts of railway history not widely known outside specialist circles. For that reason I think it’s been really important to put Samson – both our reconstruction and the original – into some sort of context.”

The original Samson was built for the London Lead Company by Stephen Lewin, of Poole, Dorset, and was used in Weardale for a quarter of a century, before being scrapped around 1904.

The 144-page hardback book, The Book of Samson, also covers the history of the original Samson and its manufacturer, as well as information on Weardale’s locomotives and tramways. 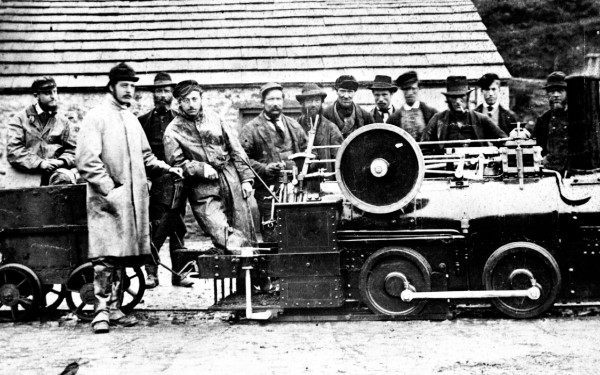