A Jukebox for John’s

Who remembers dancing in the aisles of their local cafe to the song they selected from the jukebox? Watching the record flip over and waiting for the needle to make contact, then hearing those first few bars of the song playing out through the speakers? Music is going to play a big part in our 1950s exhibit John’s Cafe, where there will be a genuine 1950s jukebox fully stocked with records from the period just waiting for our visitors to select them.

John’s Cafe, from Wingate, County Durham, is being recreated as part of Front Street terrace. The cafe, once owned by Giovanni Baptista Parisella, known locally as John, was popular with young people in the 1950s.

We have a lovely image of John Parisella’s son David when he was just a young lad, standing in the middle of John’s Cafe and you can just make out a BAL-AMI Super 100 jukebox in the background. This model was manufactured in the early 1960s so we needed to undertake some research to determine what sort of jukebox might have been in a cafe like John’s during the 1950s. John’s son David in the original cafe, with BAL-AMI Super 100 jukebox in the background. Photo courtesy of John’s family.

The first British-made jukebox was the Jack Hylton Music Maker Mk 1 made in Blackpool in 1945 by a company called Hawtins Ltd. During peacetime the company had originally manufactured fairground equipment before switching to making and supplying military aircraft components during the Second World War. In the post-war period the War Office encouraged the company, and others like them, to switch to manufacturing jukeboxes to try and help stabilise Britain’s damaged economy and pay off its crippling post-war debt to America. These first jukeboxes were very subdued in style and reflected the economic and financial climate of Britain after the war and the need for functionality to be prioritised over style, much like cars and furniture at the time.

Because of tight import restrictions imposed throughout much of Europe in the late 1940s and early 1950s, it wasn’t until 1953 when American influences really began to appear in British jukebox designs. AMI was an American company who started their off-shoot company BAL-AMI in Britain in 1953, which enabled them to sell to an ever demanding European market. By this time, however, American jukeboxes were starting to lose some of their gaudiness, and the Art Deco influence was gradually diminishing, although some features did remain such as light tubes and visible changer mechanisms.

In 1954, trading agreements were formed with various European countries which allowed some American jukeboxes to arrive in Britain for the first time, these included machines from American manufacturers such as AMI, Rock-Ola, Seeburg and Wurlitzer.

Here at Beamish we have been lucky enough to get our hands on a Wurlitzer 1250. This jukebox dates from 1950 and retains much of its original charm. We will be stocking it up with 1950s records, ready for our visitors to come in and select their favourite song. 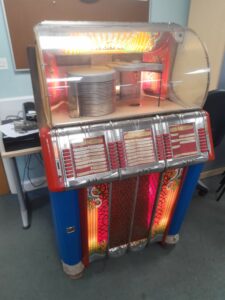 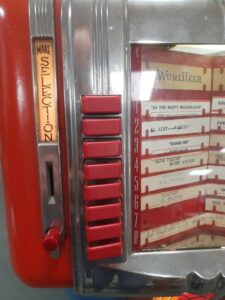 Beamish has a 1950s Wurlitzer 1250 jukebox, which will be included in John’s Cafe. 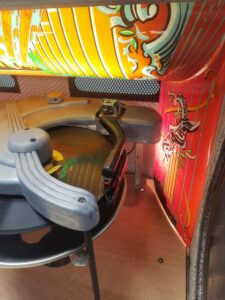 The 1950s Town’s Front Street terrace, which is due to open to visitors in early 2022, will also include a hairdresser’s in a replica of an end-terrace shop from Bow Street in Middlesbrough and a fish and chip shop.

No. 2 Front Street will share the story of the Spennymoor Settlement of artists, writers and poets. The exhibit is based on the former Spennymoor home of celebrated North East artist Norman Cornish. For more information on 1950s Town exhibits, click here.