There’s a lot of excitement over in our 1950s Town as preparations continue for the opening of Front Street terrace this February.

Beamish staff have been undertaking training in the new terrace exhibits, which are part of our 1950s Town. Items from the museum’s collection are being moved over and the finer details are coming together – including external works, street furniture and groundworks, and authentic signwriting, which is based on archive photographs from our collection. The beautiful signwriting on the windows of Middleton’s Quality Fish and Chips.

Helen Barker, Assistant Director – Engagement Activity and Collections Access, said: “We’re so excited about the progress of the terrace as we get ready for the opening in February.

“We’ve been installing items from our collections, speaking to community groups, family members and friends related to the buildings, painting and decorating, working on the landscaping, making delicious new 1950s foods, carrying out hairdressing trials – a huge amount of work has gone into the creation of these exhibits, with so much attention to detail.

“It has been a real team effort and we can’t wait for visitors to be able to see and experience the exhibits when they open as part of The 1950s Town.”

We’ve fried the very first batch of chips in Middleton’s Fish and Chip shop in our replica 1950s range – yum! We’ve installed a gas-powered range, as opposed to the coal-fired ranges in Davy’s Fish and Chip Shop in The 1900s Pit Village, as gas had become the dominant fuel in new ranges by the 1950s. We’ve been working with local schoolchildren and residents of Middleton St George to share stories of the village which visitors can read on our recreated 1950s newspaper, which we will wrap our fish and chips in.

Middleton’s fish and chip shop is a replica of a building from Middleton St George near Darlington. Doreen Middleton, who owned the property from 1952, lived on the premises and used part of the ground floor for the preparation of the fish and potatoes which were initially all manually prepared, this was very labour intensive. The original range from the fish and chip shop was donated to the museum and was used to inspire the design of the replica. We’ve also been making delicious ice cream in John’s Café! The traditional ice cream machine which will make delicious treats for visitors to buy is from a company called Edoni, which is a family business founded by Italian brothers who immigrated to Scotland. The company is still run by their grandchildren, who visited the museum recently to share their ice cream-making secrets! The museum is recreating John’s Café, from Wingate, County Durham. Using original elements from the café, the exhibit will show a popular 1950s pastime and leisure pursuit, as well as telling the story of Italian immigration and the impact that many Italian families made by setting up these ice cream parlours. We’ve been working with Maria, John’s daughter, and his family on the recreation and we’ve been working with community groups whose input will be seen in the café.

Families will be able to get ice cream, milkshakes and other treats, listen to the jukebox and sit in the carefully restored and recreated booths, or through the back in the slightly modernised area. There will photographs in the back room showing some of the history of the family-run café through the ages.

A local company has recently installed the awning outside the front of the exhibit. Archive photographs of John’s Café were used to create an exact replica.

The museum has also created a new learning activity based on John’s Café called The Inside Scoop.

Comb-ing soon to a Beamish hairdresser’s near you! We’ve been brushing up on our 1950s hairstyles, ready for the opening of Elizabeth’s Hairdresser’s – a replica of an end-terrace shop from Bow Street in Middlesbrough. Very soon visitors will be able to come through the door into a typical 1950s waiting area, get their hair styled by one of our engagers and get their picture taken under the row of 50s hair dryers from our collection. 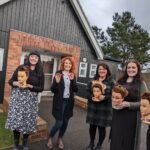 Beamish staff have been brushing up on their 1950s hairdressing skills! 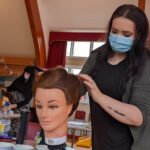 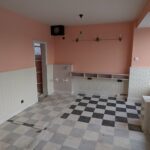 We’ll be sharing the story of 1950s hairdressing in the exhibit, including where people would have trained, as well as women’s fashion and beauty during the decade. Our Remaking Beamish Team has been working with Betty and Ian Macpherson, who were the owners of the end-terrace shop we are replicating, then called Elizabeth’s Hair Fashions, for 37 years.

The tiled entranceways for Elizabeth’s and John’s Café have been install by local artists Mark and Marcia.

The museum acquired chairs for use in the hairdresser’s, and, after many hours of hard work, our Collections Team has restored them to excellent condition! The seat covers were removed, new padding installed, and the original seat covers reinstalled. All of the vinyl has been deep cleaned and treated with a UV protectant. The legs have been cleaned and polished, and new matching ferrules (rubber feet) have been put on all of them. 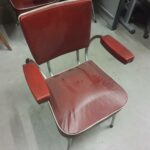 Before – the chairs needed a lot of work when we received them! 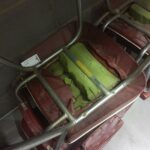 Before – the 1950s seat padding was crumbling to bits. 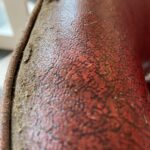 Before – ingrained dirt, hair, grease, hairspray, etc. in all of the vinyl seat coverings. 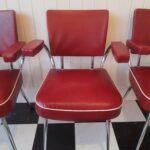 After – our Collections Team has done a brilliant job of restoring the chairs to excellent condition.

Training has also been taking place in No. 2 Front Street, which will tell the story of Norman Cornish and the Spennymoor Settlement of artists, writers and poets. The house is based on the former Spennymoor home of the celebrated North East artist.

The Spennymoor Settlement was part of a wider national movement and nurtured the talents of artists Norman Cornish, Tom McGuinness, Bob Heslop and Bert Dees, and playwright Sid Chaplin among others. Norman was the last surviving painter from the Spennymoor Settlement, which became known as the “Pitman’s Academy”.

The Settlement provided free classes and community groups and was an outlet for creativity in an area affected by unemployment and poverty. Norman was advised by warden Bill Farrell to “paint the world you know”, leading Norman to expertly capture the everyday lives of the people of Spennymoor and familiar places. The talented painter continued to capture the people of Spennymoor until his death at the age of 94 in August 2014.

Beamish staff were encouraged recently to sketch in the style of Norman, and they learnt about the history of Norman’s family and what his house on Bishop’s Close Street would have looked like. Staff and volunteers will be able to share this fascinating insight with visitors when they visit the exhibit.

Items from the museum’s collection have been moved to No. 2 Front Street and decorating is nearing completion. Upstairs bedroom in No. 2 Front Street.

We absolutely can’t wait to welcome you to explore this new area of the museum – more details to be announced very soon!

Thanks to the money raised by National Lottery players, the Remaking Beamish project has been awarded a £10.9million grant by National Lottery Heritage Fund – a major milestone in Beamish’s history and the largest single investment ever seen at the museum.

Beamish is still fundraising for the remaining project match funding, and there is a fundraising plan in place to guide this work.