Beamish visitors will be able to enjoy even more 1950s fun when a playground and putting green open in the new park in our 1950s Town.

The 1950s park and recreation ground will include a playground with traditional-style play equipment including a sandpit, swings and putting green and, later, a bowling green and pavilion.

Situated next to the welfare hall, it will be the perfect outdoor space for the young and young at heart, and will help to tell the story of the developing new estates during the 1950s. The play area will meet all current health and safety standards.

The park will open first and the bowling green and pavilion, where visitors will be able to have a go at bowling, will follow at a later date. The idea of providing open or green spaces, parks and recreation areas was not new to the 1950s. The 19th century saw increasing concerns about health, hygiene and access to open areas, particularly due to the effects of industrialisation. The result was the creation of municipal public parks as well as those developed by philanthropists.

In the North East, some of the parks we can still enjoy today were created during this period, such as Albert Park in Middlesbrough, Leazes Park in Newcastle, Mowbray Park (previously called People’s Park) in Sunderland and Saltwell Park in Gateshead – the original bandstand from which is in the museum’s Redman Park in The 1900s Town.

Despite the interruption of war, the early 20th century saw a continuation and growth in the interest of ensuring people could access open space, including playgrounds for children. The National Playing Fields Association (NPFA), now called Fields in Trust, was established in 1925 and aimed to secure and save open spaces (particularly in “increasingly congested” towns and cities), sports grounds, adequate playing fields for all sections of the community and proper playgrounds for children. With Royal support and patronage from 1933, the organisation was successful in helping to create, support and save green spaces. Following the death of King George V, a number of playing fields were created as a memorial to his involvement in the organisation. Many of these King George V Playing Fields can be found across our region.

The 20th century also saw the development of smaller parks and playgrounds, often built near to new housing estates. The need for them became more apparent with increasing traffic on roads and the growth of towns meaning some traditional parks were becoming further away for children to get to.

Playground provision grew after the Second World War, with many grants towards layouts provided by the NPFA in the 1950s. The introduction of holiday pay before the war and increasing mobility and labour-saving devices meant people had more time for leisure. Local authorities and urban districts councils were aware of the need to provide recreational facilities for people that they could reach and enjoy. Parks such as the John Whitehead Park in Billingham, where our bowling green is from, and Oliver Henderson Park at Leam Lane were created in this period close to estates built in the 1950s.

And so fond memories for the children of the time were of local parks and playgrounds with swings, banana slides, see saws and the now retired ocean wave or Witch’s Hat. Recreational amenities such as putting greens, tennis courts and bowling greens were provided for adults as well. Joining our 1950s park later in the Remaking Beamish project will be a bowling pavilion and green based on what was the John Whitehead Park Bowls Club in Billingham (more information below).

Through local newspaper archives we’ve gained insight into some of the debates and concerns around playgrounds in the 1950s.

One of the most interesting debates appears to be about ways of playing and the emergence of “junk”/adventure playgrounds in the UK after the Second World War. The idea of “junk” playgrounds, where children would and could create their own play and play equipment with materials provided, had originated in Denmark just before the end of the war. Inspired by a visit to see one in Emdrup, and then from seeing how children played on bomb sites in London, Lady Allen of Hurtwood and the NPFA championed the idea in the UK, where they became known as adventure playgrounds. They were seen as an alternative to the slides and swings of more traditional playgrounds.

If you have any memories of traditional parks, playgrounds or adventure playgrounds in the 1950s in the North East, we would love to hear from you. Contact Geraldine Straker, Remaking Beamish Community Participation Officer. Email: geraldinestraker@beamish.org.uk.

A bowling green is set to be replicated at Beamish, to help tell the story of leisure pursuits and community life in the 1950s.

The replica of Billingham Bowling Green from John Whitehead Park will be built as part of the park in The 1950s Town. The park will open first and the bowling green and pavilion, where visitors will be able to have a go at bowling, will follow at a later date.

Bowls was, and often still is, a popular pastime, and was especially popular for both men and women during the 1950s.

A temporary bowling green, set up during our Festival of 50s, is always a hit with visitors young and old, and having a permanent green will enable practise to take place all year round!

The 1950s Town will be a chance to tell the story of the development of social and leisure pursuits during that period – the concept of “leisure time” made possible during the decade by the introduction of labour-saving devices for the home.

The Remaking Beamish Team has been working with people in Billingham and members of the bowls club to help inform how we tell the story of bowling in the 1950s. We want to show the important role that the bowling green played and enable visitors to have a go themselves.

The bowling pavilion was built in the early 1950s by Billingham Urban District Council at a time when there were many new developments taking place in the area. Two clubs at the facility quickly formed – the men’s club, The John Whitehead Park Bowling Club, in 1953 and the women’s club, Billingham Ladies, in 1955. The club is still in existence and the two clubs have now merged and are called Billingham Bowling Club.

The museum has original objects from the pavilion that the club has donated including the original lockers from the changing room, bowls, mats and carriers, club badges and pins, bowls lifters and trophies. Co-op Funeralcare has sponsored the green. Beamish already has strong links with the Co-op brand since the iconic Co-op store, originally from Annfield Plain, was rebuilt in our Edwardian Town street in 1984.

Having sponsored various bowls championships and events for the last eight years, Co-op Funeralcare has strong connections with the bowling community, and saw a partnership with Beamish as a natural way to help preserve the popular pastime.

If you have any early memories of the pavilion or park in Billingham you would like to share with the museum, please get in touch with Geraldine Straker, Remaking Beamish Community Participation Officer. Email: geraldinestraker@beamish.org.uk. 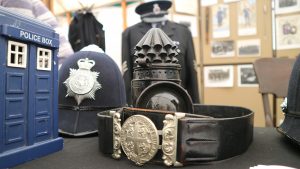 A pair of police houses from Heworth, Gateshead, and their associated single-storey office, are set to be replicated at Beamish. 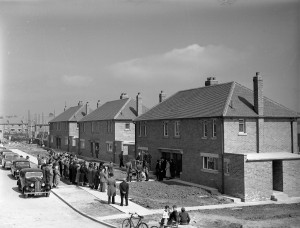 As part of The 1950s Town, we are replicating a pair of semi-detached houses from Red House in Sunderland. 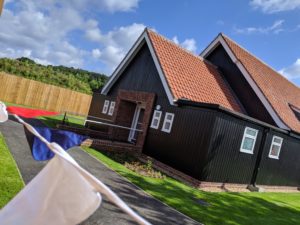 Our welfare hall was the first building to open in The 1950s Town!