Please note: We are not currently able to offer photography sessions. The safety of our visitors, staff and volunteers is our first priority as always, and we continue to have a range of COVID-19 Secure measures in place, in line with industry best practice and guidance from the Association of Leading Visitor Attractions. Have your portrait taken Edwardian style in the photographers.

Call in at JR & D Edis Photographers to experience what a visit to a photographer’s studio in the 1900s was like, complete with side-lit studio window and props!

Be transformed into an Edwardian as you dress up in stunning costumes – what colour dress will you pick? Will you be a soldier or one of the upper-class town folk? Choose your outfit – not forgetting those important props such as spectacles, canes and hats!

You will have your photograph taken in front of a hand-painted scene of Durham Cathedral, which was chosen by our visitors and is based on an original photograph, on display in the exhibit.

Your traditional photo will be developed before you leave the studio and will be mounted on a cabinet card, a decorative card produced in our 1900s Print Shop. JR & D Edis can even frame your cabinet card, available in a choice of colours and styles. Also available are postcards of recognisable places in the North East.

Bookings are available on a first come, first served basis and can only be booked in the exhibit on the day of your visit, simply call into the studio to make an appointment.

Prices for the experience appear below:

If you have had your photograph taken in the exhibit and would like to request additional copies, please call our switchboard on 0191 370 4000, they will be able to arrange this.

Our photographer’s is named after John Reed Edis, whose photography business started in Durham at 27 Sherburn Road in 1895. It then moved to more permanent premises at 52 Saddler Street, Durham City in 1897, where they remained until the business was wound up in 1964.

His daughter Daisy joined the business in 1901, whilst still in her teens. The vast collection of photographs taken by John and Daisy Edis have been dispersed between several locations, the major part is held at Durham University. Beamish has between 500 and 600 of the images dating from around 1916 to 1950. We also have objects and signs acquired once the studio closed, some of which are in the exhibit. The Studio at 52 Saddler Street, Durham City in the 1920s. Photo courtesy of Gilesgate Archives.

By the Edwardian period, photography was becoming hugely popular. During the First World War men would get their photograph taken in uniform.

Matthew Henderson, Remaking Beamish – Engagement Development Officer, said: “With the rise in photography studios, it became cheaper to have your photograph taken, so even working class people would visit photography studios. We’re showing this through the costumes as not all of them are Downtown Abbey style, there is a wide range.”

Most towns in the 1900s had a photographers studio and they often grew out of, or alongside, chemists that stocked the necessary chemicals.

Traditionally, photographers would have opened later than chemist shops with the advancement of technology. To reflect this, our photography studio has a much more updated feel to it than the business next door.

The wallpaper used is a copy of a pattern that was available to buy from the Co-op in 1907 and was found in a catalogue that is in Beamish’s archives.

It was chosen, firstly because of its colour – “pea green” was, according to PC Duchochois’ 1891 book Lighting the Photographic Studio, a favourite with photographers due to its light reflecting qualities. It also has an art nouveau motif printed on it, which was one of the most popular and fashionable styles of the era.

The mahogany panelling that forms the divide between the reception and the studio is in an art nouveau style, as is the studio fireplace. This style was considered to be extremely modern, which would have been important for a photographer, whose business relied upon fashion and up-to-date technology.

The wallpaper and fireplace, along with other details such as a beautiful restored gas chandelier and reclaimed early 20th century door furniture, help to make the space feel at the height of Edwardian fashion. 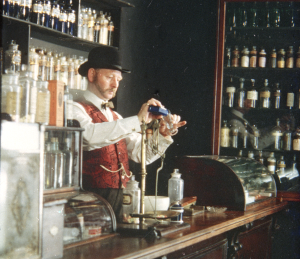