This exhibit, opened in May 2016, demonstrates a typical Edwardian chemist business, with dispensary and aerated water sections.

As well as making pills using moulds and measuring out ingredients, visitors can watch Codd bottles being filled with flavoured syrups, and can even take bottles of the tasty drinks home with them.

Flavours for the sodas will change seasonally, from sarsaparilla and blood tonic to kola (spelled the traditional way), lemonade and raspberry, and are based on recipes from our archive. A visit to the chemist was usually for medical advice and medicine, visitors can learn about miraculous 1900s “cure alls” stocked in jars of all shapes and sizes on the shelves behind the counter – cobalt blue bottles for syrups and actinic green glass for poisons.

Domestic items such as herbs, spices, soaps, traditional brushes, lavender and sweets, such as liquorice, would have been stocked and some of these will be available to buy.

Our chemist shop is named after William Smith, a chemist who worked on Silver Street in Durham.

Born in 1871, Smith, who was married to Jessie Smith, moved into his business in 1902, not too far away from the corner building on Elvet Bridge.

He had a few chemist branches around Durham City and the surrounding villages, two of his shops are still standing in Esh Winning and Ushaw Moor. Interestingly our records show that Smith sold chemicals to Edis (who our photographers is named after) for his photography business.

It’s unknown where Smith learnt his trade, but his prescription books (spanning 1897 – 1921) show that he made a variety of recipes and used a variation of the relatively antiquated ‘apothecary’s system’ of weights and measures by 1901, so he was well trained.

Druggists and apothecaries had been around for centuries but through the Victorian era it became a more formalised profession and qualifications and licences were needed.

Frank Atkinson, the museum’s founding Director, earmarked a chemist on Finkle Street in Stockton-on-Tees in the early 1960s for eventual preservation at Beamish.

This chemist belonged to William Hardcastle, a well-known chemist in the area. The interior was purchased by the museum for £50 in April 1962 as it was believed to be the last remaining example of its type in the North East. The shop was set up at Beamish Hall as part of the A-Z of Beamish exhibition. Quite a lot of visitors still come in and ask where the chemist is because they remember the exhibition at Beamish Hall.

Beamish has the contents and fittings from at least three chemist shops in the collection. As well as Hardcastle’s, and Hallaway’s in Carlisle, the best known is that of John Walker, of Stockton-on-Tees, who pioneered the friction match in the early 19th century. These items came with those from Hardcastle’s.

Why are we making soda in the chemist’s?

After the invention of soda machines in America (the first patent was in 1810) the technology was exported to Britain and companies such as Bratby and Hinchliffes made relatively cheap soda plants, which carbonated water to make it fizzy, using carbonic acid (made from mixing chalk with sulphuric acid). Lots of local chemist’s bought these machines to create imitations of the kinds of mineral waters that were available at spas like Harrogate and Bath and sold them as being medicinal.

Gradually they experimented with other flavours and the big soda companies developed. Vimto was invented in 1908 in Manchester and was originally intended to be a tonic water. Soda water became popular with the public because it was tasty and supposed to be good for you, but it was also an alternative to alcoholic drinks so became particularly popular during the Temperance movement.

Basically chemists had access to the chemicals needed to create fizzy water, could market them as medicinal and had premises to sell them from.

As the Victorians became enthusiastic about flavoured and coloured fizzy drinks they needed to keep all that fizz in somehow. In 1872 Hiram Codd of London invented and patented a bottle which was made with a marble captive inside it; the bottle was filled upside down, and the marble was held against a rubber ring by the gas pressure of the carbonated drink. So when you stood the bottle up the marble stayed sealed at the top.

To open the bottle and drink the soda you had to hit the marble, this became known as “Codd’s Wallop”. “An experimental workshop”, describes the aerated water section of our new chemist exhibit.

Visitors can see a Bradford gas engine, from Windermere Terrace in North Shields, which would have powered the soda pump. There is also be a Codd bottler, of which there are very few still in existence, which Beamish has on loan from the Museum of Bath at Work.

Visitors can hear about this process, pick flavours from the syrup jars on display, see the syrup and aerated water being added and the caps being placed on the bottles using a capper.

The chemist is decorated in an older style to reflect that it is a more established and traditional business in comparison with the photographers. This means that, although set in the 1910s, it seems as if it has changed little since the 1880s, and in parts appears to be even older, given that the building we are replicating was originally built during the mid-Georgian era.

This means that the interior includes heavy, dark, wooden shop fittings. The fireplace in the chemist is a decoratively fussy, reclaimed hob grate. 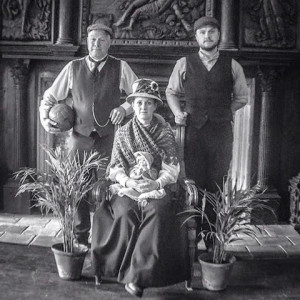